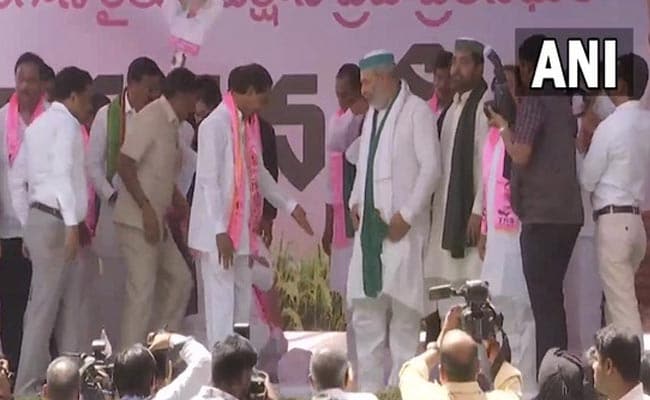 Telangana Chief Minister K Chandrasekhar Rao is leading the protest, and is accompanied by TRS leaders.

Speaking to the media, Telangana Chief Minister’s daughter TRS MLC K Kavita urged the Center to procure the crop and demanded a common procurement policy for the country.

“Our farmers are not getting the right price. We request the central government to procure paddy from our state. We demand a common procurement policy. Rakesh Tikait earlier also with CM K Chandrashekhar Rao on agriculture issues We have spoken and he has come here to support us,” said Kavita.

TRS MPs, MLCs, MLAs and other elected representatives are taking part in the “dharna”, while claiming that “the Centre’s policy is discriminatory towards Telangana farmers”.

Recently, TRS activists blocked four national highways in Telangana to suppress their demand for a “uniform” procurement policy in the country. The party decided to hold a protest in Delhi to raise the issue at the national level.

Earlier on Sunday, while addressing the media, Kavita said that the country’s food security would be in danger if the ‘Equal Purchase’ policy is not formulated by the Centre.