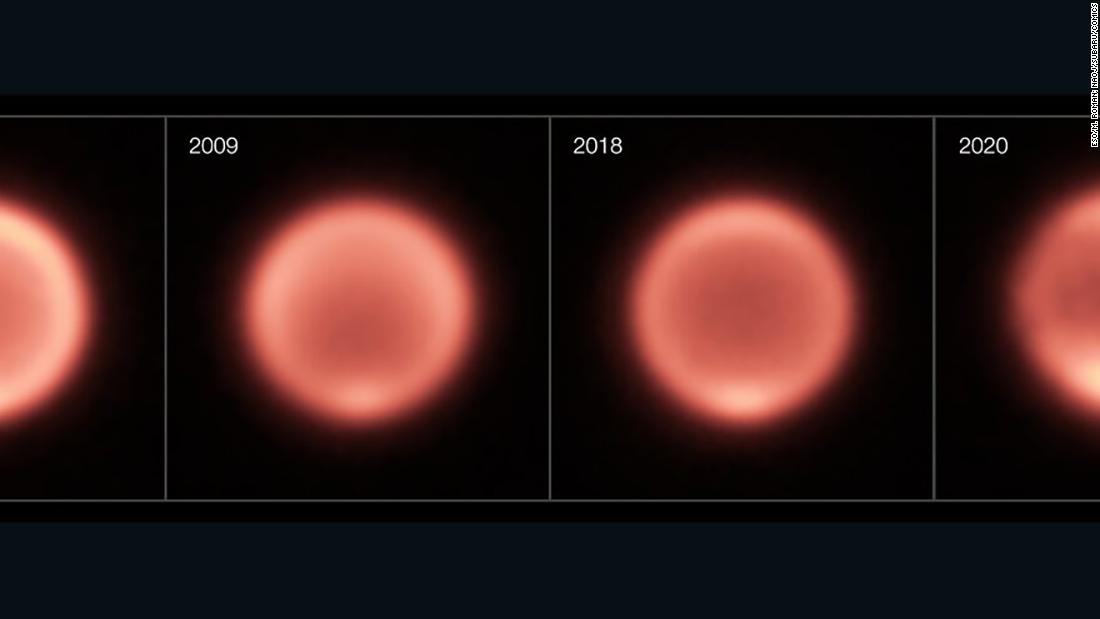 Astronomers observing Neptune with several ground-based telescopes for the past 17 years tracked a surprising drop in the ice giant’s global temperature, followed by a dramatic warming trend at the planet’s south pole.

Neptune, which orbits the Sun at a distance of 2.8 billion miles (4.5 billion kilometers), experiences Earth-like seasons—they just last much longer. A year on Neptune lasts about 165 Earth years, so a season can last about 40 years. Neptune’s southern hemisphere has had a summer season since 2005.

Astronomers decided to track the planet’s atmospheric temperature after the southern summer solstice that year.

Nearly 100 thermal images of Neptune taken since then showed that much of Neptune gradually cooled, falling by 14 degrees Fahrenheit (8 degrees Celsius) between 2003 and 2018.

A study on the phenomenon published Monday in the journal Planetary Science.

“This change was unexpected,” said lead study author Michael Roman, a postdoctoral research associate at the University of Leicester, in a statement. “Since we are seeing Neptune during its early southern summer, we expected temperatures to gradually warm, not cool.”

Then, a dramatic warming event occurred at Neptune’s south pole between 2018 and 2020, and temperatures rose by 20 degrees Fahrenheit (11 degrees Celsius). This hot polar vortex completely reversed any cooling that had occurred before.

Such polar heating has never been observed on Neptune.

Study co-author Glenn Orton, senior research scientist at NASA’s Jet Propulsion Laboratory, said in a statement: “Our data cover less than half of the Neptune season, so no one expects to see big and rapid changes. Was.”

Frosty Neptune has an average of negative 340 °F (negative 220 °C), and astronomers still do not know what causes these temperature changes.

For now, they have recognized that unexpected changes can be caused by a number of factors.

“The temperature variation may be related to seasonal changes in Neptune’s atmospheric chemistry, which can change how effectively the atmosphere cools,” Roman said. “But random variability in weather patterns or even a response to an 11-year solar activity cycle can have an effect.”

More observations will be needed to truly explore these possibilities. The James Webb Space Telescope will observe Uranus and Neptune later this year. The space observatory’s mid-infrared instrument can map the chemistry and temperature in Neptune’s atmosphere and identify what is causing the change.

Neptune is 30 times more distant from Earth than the Sun, and it is the only planet in our Solar System that is not visible to the naked eye from Earth. So far only NASA’s Voyager 2 spacecraft has flown close to Neptune, which happened in 1989.

“I think Neptune is very interesting to many of us because we still know so little about it,” Roman said. “All of this points to a more complex picture of Neptune’s atmosphere and how it changes over time.”