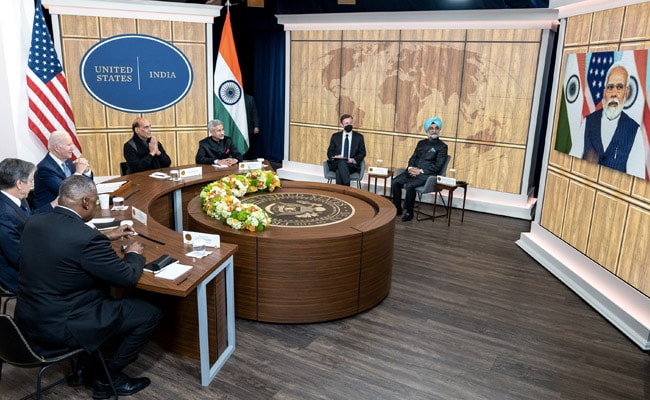 The United States has announced its full support to India’s upcoming G20 Presidency.

New Delhi: The United States of America has extended its full support to India’s upcoming G20 Presidency starting from December 1 to November 2023 this year.

India and the US held 2+2 ministerial talks with the Indian side under the leadership of Defense Minister Rajnath Singh and External Affairs Minister S Jaishankar in Washington and the US side was represented by Secretary of State Anthony Blinken and Defense Secretary Lloyd Austin on Monday.

“The United States extends its full support to India’s upcoming G20 Presidency from December 2022 to November 2023,” said a joint statement issued after the 4th India-US 2+2 Ministerial Dialogue. In this context, the Ministers reiterated their commitment to work together on international security, social and economic issues of global interest and impact, the statement added.

Replying to a question in the Rajya Sabha last Thursday on how India is preparing to assume the presidency of the G20 in December this year, Minister of State for External Affairs Rajkumar Ranjan Singh elaborated on India’s role. The presidency of the G-20 and the responsibilities and power the position will bring to the country.

“As the G20 Presidency, India will set the agenda for the year, identify themes and focus areas, discuss and work out outcome documents. The G20 Secretariat will be responsible for a smooth transition from the previous Presidency, preparedness and conduct,” The Minister of State had said.

He added that hosting the G20 deliberations will also result in “economic opportunities in various sectors such as tourism, hospitality, IT and civil aviation during our presidential year”.

“India to identify, highlight, develop and strengthen international support for priorities of vital importance to developing countries in diverse social and economic sectors ranging from energy, agriculture, trade, digital economy, health and environment to employment, tourism , anti-corruption and women empowerment, including the focus areas that affect the most vulnerable and underprivileged,” he had said.