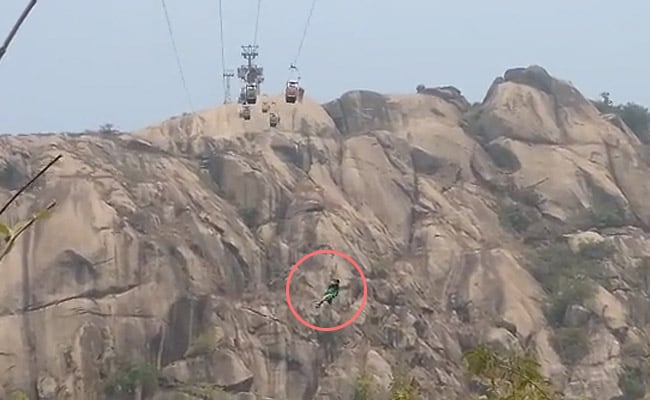 During the rescue operation in Deoghar district, the woman lost her balance and fell on the ground.

Deoghar: At least three people have died in rescue operations in Jharkhand, where over 40 people were trapped in cable cars since Sunday after two cable cars collided on a ropeway due to a technical snag.

Among those killed, a woman fell to the ground after falling from a rope during a rescue operation in Trikut Hills of Deoghar district of Jharkhand.

Videos from the site show the woman losing her balance and falling to the ground meters below. The seriously injured woman later died during treatment, officials said.

A civil surgeon at the hospital said, “The woman suffered head injuries after she fell. She died on the way to the hospital.”

One person also died on Monday, as he was rescued by an Air Force helicopter. Officials said the man allegedly lost his grip when he was being carried on a helicopter and fell to the ground.

The incident took place on Sunday afternoon after two cable cars collided due to a technical fault on the ropeway on Trikoot Hills near Baba Baidyanath temple.

The rescue operation had to be called off after sunset last evening as the ropeway passes through a picturesque yet dense forest surrounded by hills, which is difficult to reach except by air.

The Jharkhand High Court has taken suo motu cognizance of the Deoghar ropeway incident and ordered an inquiry into the matter. The court will hear the matter on April 26.

According to the Jharkhand Tourism Department, Trikut Ropeway is the highest vertical ropeway in India. It is about 766 meters long