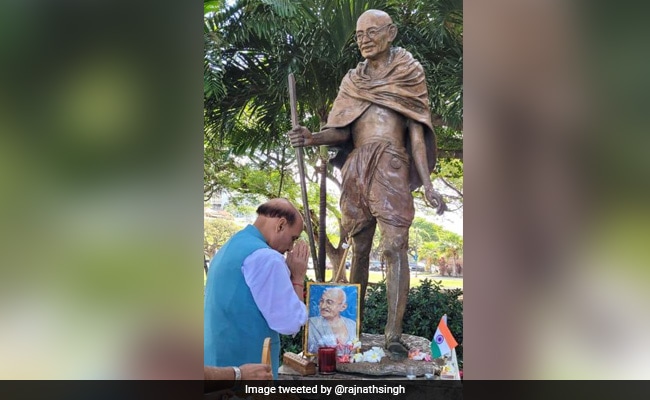 Rajnath Singh pays tribute to Mahatma Gandhi at his statue in Hawaii.

Mr Singh is in the air capital for a brief visit to the headquarters of the United States Indo-Pacific Command (USINDOPACOM), the unified combatant command of the US Armed Forces responsible for the major Indo-Pacific region. He arrived in Honolulu from Washington on Wednesday.

Sharing a picture, Rajnath Singh tweeted on Thursday, “Paying tributes to revered Bapu at his statue in Honolulu, Hawaii.”

Paying homage at the statue of revered Bapu in Honolulu, Hawaii. pic.twitter.com/oyfUy7MnVW

There is extensive engagement between USINDOPACOM and the Indian Army, which includes numerous military exercises, training programs and exchanges.

Rajnath Singh arrived in the US on Sunday to attend the India-US ‘2+2’ ministerial dialogue in Washington on Monday with External Affairs Minister S Jaishankar – the first under the Biden administration.

Ahead of the 2+2 talks, Rajnath Singh held a bilateral meeting with Secretary Austin and reviewed the entire gamut of India-US defense ties and agreed to take the military-to-military relationship forward.