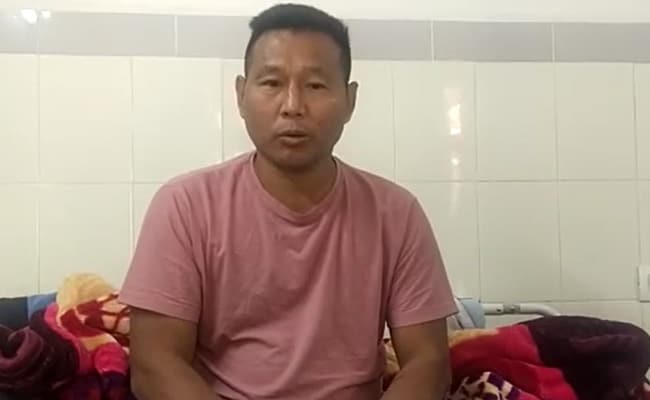 Chongmei Konyak is in hospital after being shot in a shootout

Guwahati: “The bullets were coming from all sides, not only from the soldiers who were running away.”

Chongmei Konyak had seen it all before – his training as an Indian Army soldier began spontaneously.

Caught in the middle of the cross-fire, Mr Konyak hits the deck, crawling to safety. “I rolled over a creek to save myself.”

A few meters away, the army men, all members of the elite 21 Para Special Force, opened fire after being surrounded by furious villagers, who were reacting to the deaths of six people from Oting village, the village where they lived. . Most of the men worked in a nearby coal mine.

Just a few hours ago, the same unit of jawans ambushed a pickup truck with the aim of targeting the terrorists. Except, the men they shot turned out to be innocent villagers, who worked in the nearby mines.

When the situation became more tense, dozens of villagers attacked the army personnel with sharp weapons. A soldier was killed. Others retaliated in self-defense. In this they may have got the support of other commandos who were in hiding positions in the vicinity of the incident.

“I trained in the military, so even in that chaos, I could figure out where the bullets were coming from,” says Mr Konyak, who left the army in 2012. He was commissioned into the Army Service Corps and was in uniform for fifteen years.

Army sources have told NDTV that they are looking into all angles in their probe, including the claim that shots were fired from areas outside the immediate site of the encounter. “Any such allegation will also be brought under the purview of the Court of Inquiry.”

NDTV has also approached the Nagaland government with questions. This report will be updated upon receipt of feedback.

Mr Konyak, who is now in hospital, is recovering from a bullet injury sustained in the scuffle. The standard issue weapon used by Army Special Forces has a gap hole near its left heel after being hit by a round from an Israeli-made Tver automatic rifle.

“I felt bullets coming from the jungles as well. Para Special Forces personnel who had night vision devices were firing. We couldn’t see them but they clearly saw what was happening.”

Mr Konyak’s testimony is an important piece of evidence being collected by the Special Investigation Team probing the tragedy in Nagaland. The SIT, headed by Inspector General of Police Limasunup Jamir, is probing the charges of murder and attempt to murder, which were registered on December 6 against the Army personnel.

In a statement to NDTV, the Nagaland Police say that they will be able to conclude on the basis of “statements of eyewitnesses and demonstrations in the case” that the SIT is being used “in this case”. crime scene with an expert forensic team.

While the SIT has been allowed to record the statements of the jawans involved in the failed ambush, the soldiers cannot be prosecuted without approval from the Home Ministry. Soldiers fighting terrorism in parts of the Northeast are protected by the Armed Forces Special Powers Act (AFSPA) which provides immunity from arrest and prosecution. According to the Nagaland Police, the permission to record the statements of the Army personnel was obtained between 18.12.2021 and 28.12.2021 after “several summons” were sent to investigate the Army and Assam Rifles personnel.

The SIT’s investigation runs parallel to the investigation headed by Major General of the Army. Yesterday, Indian Army’s investigative team visited the spot in Oting village and brought with them at least one jawan involved in the incident. “The Court of Inquiry is proceeding rapidly and all efforts are being made to conclude it at the earliest,” the army said in a press release.

For Mr Konyak, there is a sense of disbelief at what he saw. “I thought it was a gunfight between the army and the terrorists. I didn’t even think for a moment that they were killing innocent people. I can’t even dream that the Indian army could do this.” ‘