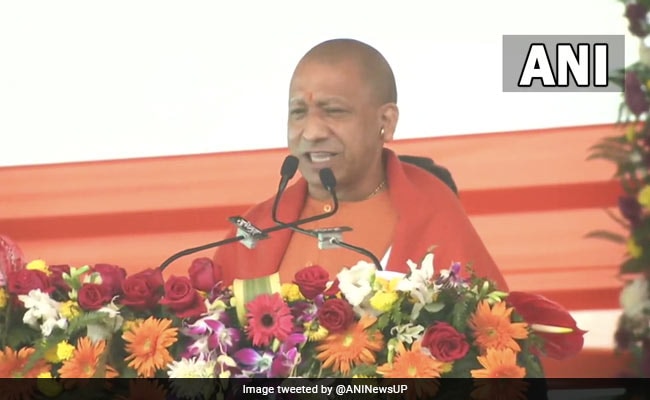 Yogi Adityanath said, “It was our government that provided electricity and built toilets.” (file)

Lucknow: Chief Minister Yogi Adityanath on Saturday said that during the Samajwadi Party rule in Uttar Pradesh, the famous ‘Rampuri’ knife was used only to grab land of the poor, while the present state government is promoting it under the ODOP scheme.

Chief Minister Adityanath made the scathing remarks in Rampur, home of veteran SP leader Azam Khan, while inaugurating some completed projects and laying the foundation stone for some new projects for a total of 25 development works worth Rs 95 crore.

He also mocked SP chief Akhilesh Yadav’s remark that he too could have built a Ram temple, saying he could have thought of it only if he had time after developing the graveyard.

referring to the “Rampuri ChakkuA kind of famous knife named after Rampur district, Mr. Adityanath said that the sharp-edged weapon has been included in his government’s one-district-one-product scheme for the betterment of the people of the area.

“We obey the ‘guru’ Tradition (tradition) to use Rampuri knives under the ODOP of the district). Good people use it to protect the country and religion.”

“But the wrong people use it to loot and capture the property of the poor and downtrodden. It became a tool to grab the land of the poor during the SP government,” he said.

Attacking SP chief Yadav, Chief Minister said, ‘I heard’babua“Telling people that he too could have built a Ram temple. If he had got time after building the cemetery, he could have built a temple.” “It is surprising that those who did not hesitate to open fire on Hindus in Ayodhya are now talking of building a Ram temple there,” he said.

Comparing his government’s performance with that of the previous government, Mr. Adityanath said, “The difference is clear. Before 2017, Muzaffarnagar and Saharanpur riots accused were given the facility of chief minister’s residence.” “But after 2017, farmers are honored and Gurbani is recited there,” he said.

The Chief Minister said, “Our government adopted a zero-tolerance policy to eliminate crime and criminals, snatched control of the property of the poor from the landlords and their illegal properties were razed by bulldozers.”

“When you didn’t give electricity at all (during your rule), where is the talk of free electricity? On the contrary, apologize to the people for recovery of electricity dues that you used to do,” the chief said. The minister said.

He said, “Today we can say that there is electricity everywhere in UP without any discrimination, including the huts of the poor and the palaces of the rich.”

“It was our government that provided electricity and built toilets,” he said.

Earlier on Saturday, Mr. Yadav had said that if voted to power, his government would give 300 units of electricity free to domestic consumers, and the electricity bill on irrigation would be waived off.

Referring to the seizure of bundles of unaccounted and uncountable cash during raids by taxation officers on some perfume traders and manufacturers, including SP MLC, CM Yogi made a scathing attack on the SP and asked the public to apologize.

He said, ‘We are extorting money from people who rob the public and bury them in the walls. In the SP government, the youth were cheated and did not get a job.

Highlighting the BJP’s work at the Center and in the state, Mr. Adityanath said, “After Modi ji came to power, the Kartarpur Corridor linked to Guru Nanak Dev ji was opened, whereas the previous governments exploited the poor, encouraged rioters. used to inspire terror. Attack and drop cases against terrorists.”

Questioning the earlier Congress government at the Centre, the Chief Minister asked, “Why didn’t they repeal the legislative provision in Kashmir during its rule? When SP and BSP used to support Congress, why didn’t they abolish it? The Narendra Modi government has to do away with Article 370.”