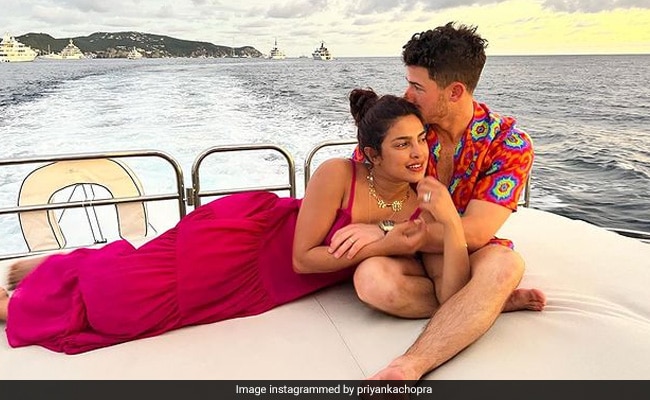 New Delhi: On Monday, Priyanka Chopra took to her Instagram account to share several pictures from her New Year celebrations. The actress seems to have had a great time with her husband and singer Nick Jonas and her friend and businessman Natasha Poonawalla. Sharing the post, Priyanka wrote: “So grateful for the photo dump* friends family and friends. Here’s to celebrating life. Love you Natasha Poonawalla.” She tagged “heaven” as the location in the post, along with hashtags like #2022 and #happynewyear. Reacting to the post, Nick dropped a heart emoji in the comments section.

The first picture shows himself in a pink outfit, relaxing on the deck of a yacht, while Nick Jonas was wearing a colorful shirt. In the second picture, Priyanka can be seen sunbathing in an orange swimwear, while in the third picture herself can be seen raising a toast. In a picture, the actress is also seen wearing ‘Happy New Year’ glasses while dining.

Recently Nick Jonas shared an emotional picture with Priyanka Chopra. In the picture, the couple can be seen twinning in a white outfit. Priyanka can be seen kissing her husband’s cheek. Sharing the post, Nick wrote: “My forever new year kiss.”

Check out the picture shared by Nick Jonas here:

In terms of work, Priyanka will next be seen in it. Citadel, it is a multi-series with productions in India, Italy and Mexico and stars Richard Madden and will be directed by the Russo Brothers. Citadel This is Priyanka Chopra’s second project with Amazon Prime Video after announcing music project, a music-themed dance reality show, which she will host with Nick Jonas. Priyanka Chopra appeared in Netflix show white Tiger, based on the Booker Prize winning novel by Aravind Adiga. she was last seen Matrix 4,