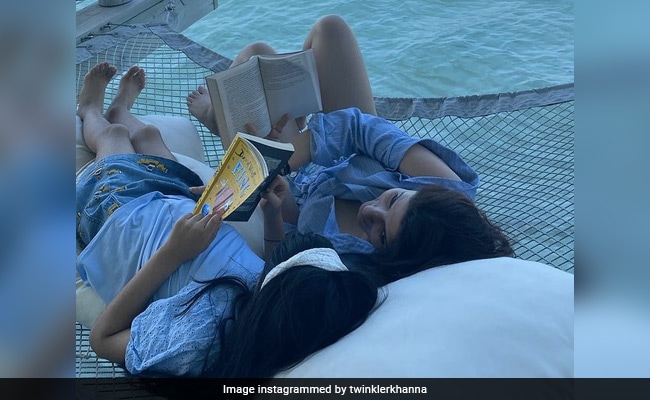 New Delhi: On Monday, Twinkle Khanna shared a post with daughter Nitara on her Instagram handle. Twinkle shared a picture from her vacation trip to Maldives. Sharing the post, the actor wrote: “She licks me down with a tongue that can double as an electric mosquito racket and I always have more questions than answers. My only relief is a book in her hand.” To pause so that his mind is busy and his mouth is closed. Yet another reason to read them—a book a day keeps weird kids away!” He also added hashtags like #Fing and #davidwalliams to his post.

On Twinkle Khanna’s birthday, Akshay Kumar shared a picture on his Instagram account, in which he can be seen enjoying a vacation in Maldives with Twinkle. Sharing the post, Akshay wrote: “It’s easy to take me with you, even the blues in my stride…Happy birthday Tina.” Twinkle made her film debut in 1995 with Rajkumar Santoshi’s directorial Barsaat. In 2015, she released her first non-fiction book, Mrs Funnybones, which was declared as a bestseller, making Khanna India’s best-selling female author that year.

Talking about the work front, Akshay Kumar’s sooryavanshi The blockbuster was a hit in November. Now, the actor is all set to release his upcoming film Prithviraj, The film stars Manushi Chhillar in the lead role. The story of the film is based on the Rajput king, Prithviraj Chauhan and is directed by Dr. Chandraprakash Dwivedi and supported by Yash Raj Films.