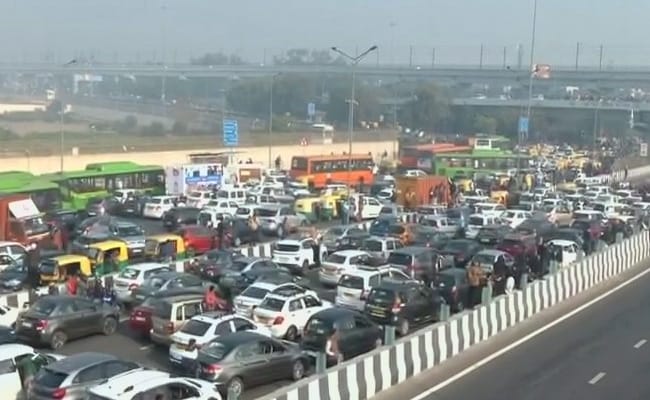 New Delhi: Delhi BJP workers on Monday protested “chakka jams” against the city government’s new excise policy and blocked roads at various places in the national capital, leading to traffic jams in important parts, including the ITO, near Akshardham temple and on the ring. done. Street.

Responding to the protest, Delhi Deputy Chief Minister Manish Sisodia said the BJP leader is “rattling” as the new excise policy is aimed at curbing the sale of illicit liquor.

The protest near Akshardham Temple was led by Delhi BJP President Adesh Gupta.

“Delhi government is opening liquor shops illegally across the city under its new excise policy. Shops are being opened near residential and religious places. Our protest will continue till the policy is withdrawn,” Gupta told reporters. is not taken.”

He said that liquor shops will not be allowed near religious places, schools and residential areas.

Mr Sisodia said BJP leaders are “rattled” by the new excise policy as the Arvind Kejriwal government has “stopped theft” of Rs 3,500 crore (which used to come through illegal sale of liquor).

In a tweet in Hindi, the Deputy Chief Minister said, “Now this money is going to the government for public welfare. Earlier this money used to go to BJP leaders and liquor mafia.”

Commuters faced trouble due to traffic jams due to protests on important road stretches.

A passenger stranded on NH-24 said, “There is heavy traffic jam on NH-24. Most of the roads are blocked by protesters and this is causing inconvenience to people like us who need to reach office on time.” Asked about the reason commuters are facing trouble, Gupta claimed that it is a public agitation and people are ready to bear it to get rid of the new product policy of the Aam Aadmi Party (AAP) government.

People turned to the Delhi Metro to avoid the roads, leading to heavy rush at metro stations during morning office hours.

Another passenger said, “There were no autorickshaws or cabs available and there were huge queues outside metro stations. Many passengers were standing.”

However, the traffic police say that the jam has been removed from important parts.

A senior traffic police official said, “The situation is normal now. There was heavy congestion at two major points. One near Aksharsham and the other near ITO. Traffic movement was affected for sometime, but it is smooth now.” ” The official said that with the help of local police, traffic was normalized and the protesters were cleared from those places.

Traffic jam was also seen on NH-9. Another police official said that both NH-9 and NH-24 have been removed for smooth traffic.

The protesters raised slogans against the city government and its new excise policy.

He repeatedly declared that all emergency vehicles should be given way and there should be no damage to public property.

Under the new excise policy, 849 premium liquor contracts are being opened across the city. This policy was implemented in the city from November 17, 2021.