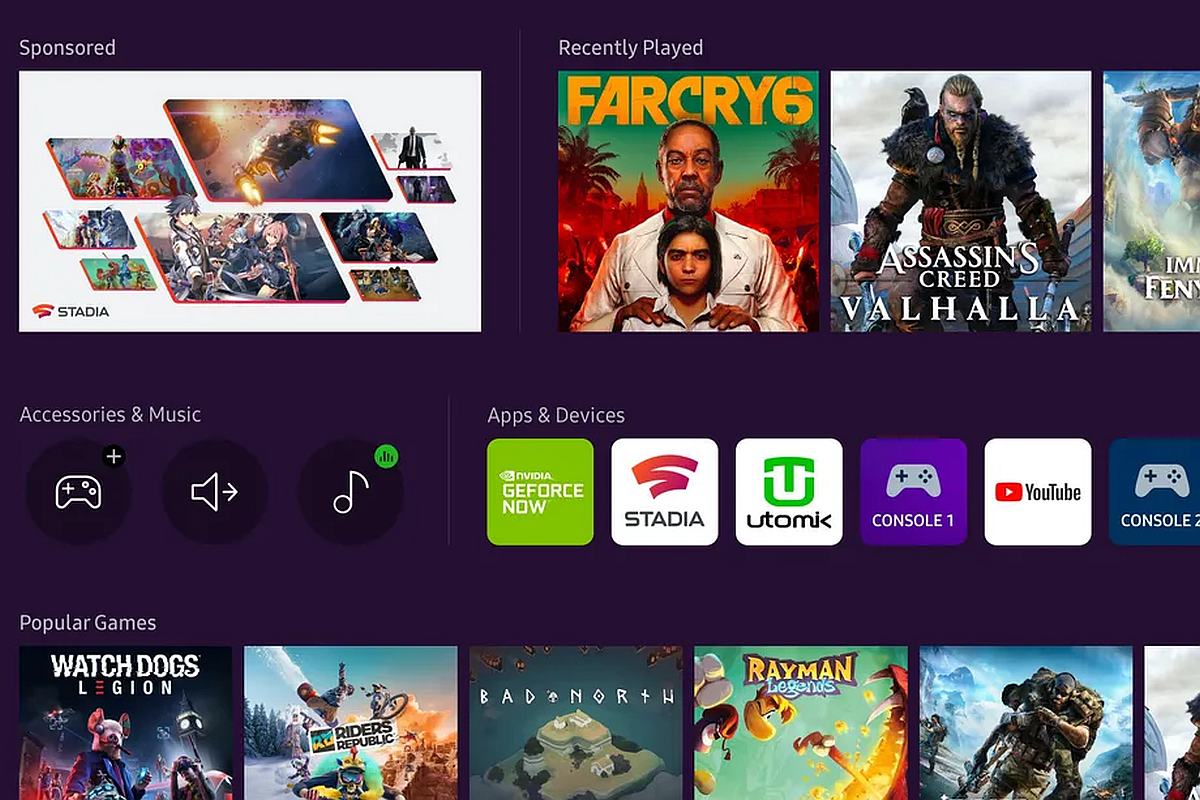 Ahead of CES, Samsung announced its 2022 smart TV lineup, which includes the Micro LED, new QLED, and Lifestyle series, as well as a new lineup of soundbars. The new smart TVs and soundbars have Dolby Atmos support. The company introduced a new Smart Hub for its 2022 Smart TVs, which it claims enables “smart content curation, cloud gaming, video calls, on-screen multitasking, NFT management and more.” One of the main features of Smart Hub is the Gaming Hub that lets players stream games from a handful of cloud gaming services. Samsung also introduced its 2022 Echo Remote, which uses radio waves from the router to charge itself.

Via a press release, Samsung announced that owners of its 2022 Smart TVs will be able to use the Smart Hub’s Gaming Hub to play games using Nvidia GeForce Now, Google Stadia and Utomic game streaming services. Samsung also said that players will benefit from faster game loading by using the Gaming Hub on Samsung Smart TVs launching in 2022. Microsoft said to launch a smart TV app for Xbox Game Pass soon, it could also come to Samsung’s Gaming Hub soon. Apart from gaming, the new Smart Hub will also allow users to switch between media and ambient modes.

According to a report in The Verge, the Gaming Hub will also let users play their HDMI-connected consoles with game streaming services. Essentially, it will let users play cloud games and console games with a single controller – with both PlayStation and Xbox controllers supported from the start.

Samsung’s gaming product director Mike Lucero told The Verge that it is “working with partners to bring the best level of service to our platform.” “We will announce the details as we get closer to the launch,” he said. It’s unclear whether the new Gaming Hub functionality will be available on existing TVs, but Lucero noted that “we’re starting with our 2022 models and are looking to make the Gaming Hub available to even more Samsung customers.” working.”

Samsung also announced three new lineups of smart TVs ahead of the Consumer Electronics Show (CES) 2022. The first of these is the Micro LED Smart TV range. It comes in three display sizes- 110-inch, 101-inch and 89-inch. This range of smart TVs features 100 percent DCI and Adobe RGB color gamuts and has a 99.99 percent screen-to-body ratio. The display has 4K resolution up to 120Hz refresh rate. It is also using features like Art Mode and Multi View.

The second lineup introduced is the Neo QLED Smart TVs with the new Neo Quantum processors. There is also an iComfort mode that automatically adjusts the brightness and tone of the screen depending on the surroundings. Other features include a true depth enhancer and shape adaptive lighting technology to enhance brightness, accuracy and overall picture quality. They also get an 8K resolution display and an enhanced version of OTS Pro, object tracking sound. Lastly, Samsung detailed its 2022 lifestyle range of smart TVs, which will include models in three sub-categories – Frame (from 32- to 85-inch models), Serif (from 43- to 65-inch models) ), and Cero (with a new vertical multi view feature).

Apart from this, Samsung has also introduced a new lineup of soundbars. These include the updated Q Symphony surround sound experience and wireless Dolby Atmos. It briefly outlined the HW-S800B Ultra Slim soundbar, said to redefine the slim category by integrating passive radiator technology into the sub-woofer for better bass. It has top-firing speaker channels, and has a depth of 1.6 inches.

Samsung is also introducing a new Watch Together app that will let friends and families video chat while watching content. Earlier this week, Samsung announced an NFT aggregation platform that will allow users to search, browse and buy NFTs directly from their smart TVs. Users will be able to preview the NFT as well as read about its creator and creation story behind the token. Users who own NFTs will be able to display them on Samsung Smart TVs.

This week on the Orbital, Gadgets 360 podcast it’s an absolute television spectacle, as we discuss 8K, screen sizes, QLED, and mini-LED panels — and offer some buying advice. Orbital is available on Apple Podcasts, Google Podcasts, Spotify, Amazon Music and wherever you get your podcasts.