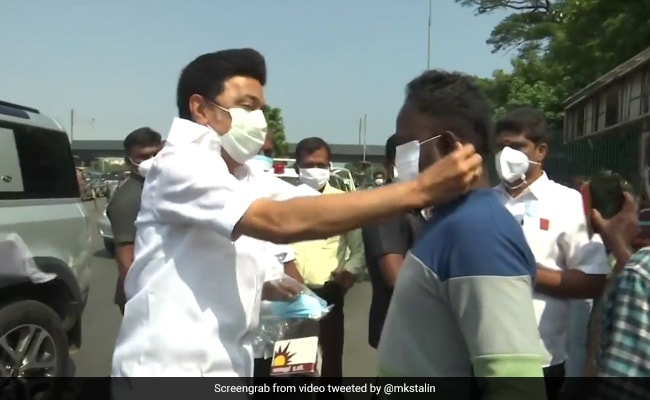 Chennai: Tamil Nadu Chief Minister MK Stalin was seen distributing masks on the streets of Chennai today as the southern state records a spike in coronavirus cases like the rest of the country.

In a video he shared on Twitter, he is seen stopping his car and distributing masks among people. He said that he saw some people on the streets without masks.

“On my way back from the headquarters to the camp office, I noticed that some people were not wearing masks in public.” The rough translation of his tweet in Tamil reads.

“Everyone please wear a mask!” Stalin appealed. In the clip, he helps a man wearing a mask and some violators greet him with a smile.

Ever since the pandemic hit the country, officials have been repeatedly asking people to wear masks in public places or face penalties.

Mr Stalin’s gesture comes at a time when other political leaders have been criticized for major election rallies – ahead of elections in five states – that attract huge crowds.

His candid moments with the locals have often been caught on camera. Last year, a video of him cycling on Chennai’s East Coast Road and stopping for tea at a roadside shop went viral, surprising locals.

Their action today also recorded the seriousness with which COVID regulations need to be followed with the highly infectious Omron variant spreading so rapidly in many parts of the country.

Delhi and Mumbai are among the top cities where the new version is believed to have prompted the spike.