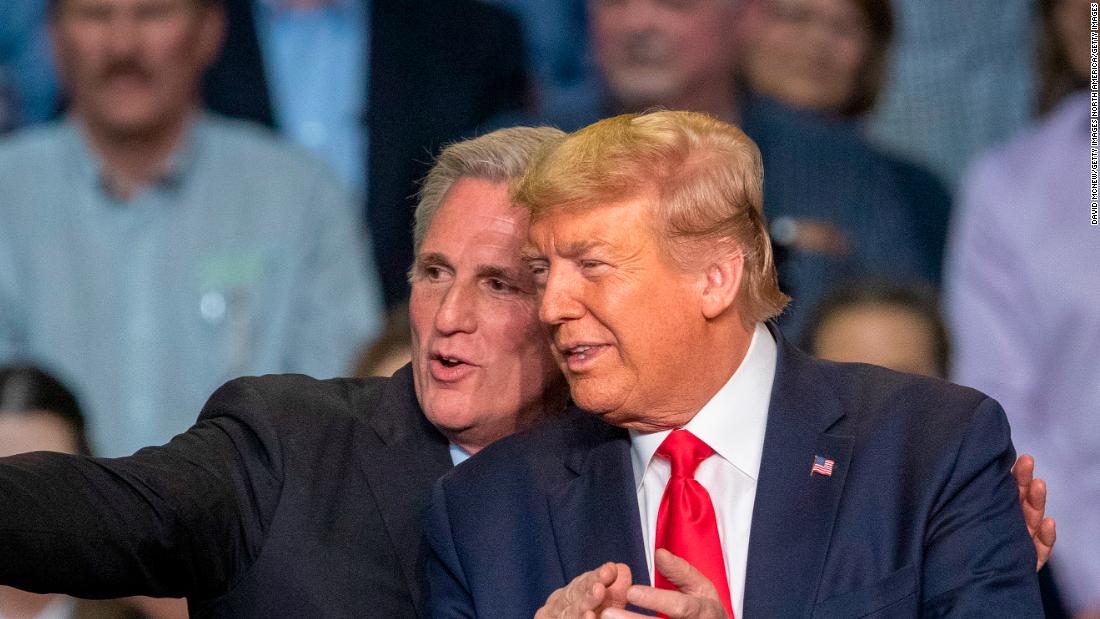 The latest evidence comes courtesy of CNN’s KFile, which revealed a local California radio interview McCarthy did on January 12, less than a week after the rally and subsequent riots. “I say he has a responsibility,” McCarthy said of Trump. “He told me personally that he has some responsibility. I think a lot of people do.”
Which reflects what McCarthy said on the floor of the House the next day. Here’s the key bit:

“The President takes responsibility for Wednesday’s attack on Congress by mob rioters. When he saw what was happening, he should have immediately condemned the mob. These facts require immediate action by President Trump.”

This is also in line with CNN reporting of an “outrageous” phone call between McCarthy and Trump on January 6 in which McCarthy pressured the then-president to call for an end to the rioting. Trump reportedly said, “Well, Kevin, I think these people are more upset about the election than you are.”
All this does not match how McCarthy sought to frame his words and actions on January 6 and beyond.

By April 2021, McCarthy was changing his story to address Trump’s blame.

“What I talked to President Trump about, I was the first person to contact him when the riots were going on,” he said in an interview on Fox. “He didn’t see it. What he ended the call with was saying – telling me, he’ll do something to make sure it stops. And that’s what he did, he put up a video afterwards.”

Which, well, isn’t entirely accurate—even if you take McCarthy’s claim at face value that Trump knew nothing about what was happening at the Capitol until his phone call.

(Sidebar: Coverage of the riots that took place on cable all day that day was everywhere. And Trump is a huge consumer of cable news.)

McCarthy’s revised timeline – which he has been speaking of since at least last April – is not in sync with what we know about Trump’s actions (and inaction) that day.

CNN’s Melissa Mahtani reported this after 4 p.m. on January 6:

It’s been more than two hours since a chaotic mob of rioters surrounded and broke into the Capitol. Despite numerous calls for President Trump by both Republicans and Democrats to demand his supporters leave the Capitol building, the President hasn’t done that yet.”

When Trump finally released a video asking the rioters to disperse, it wasn’t really a coercion. Trump said in the video, “I know your pain. I know your hurt… But now you have to go home.”

This is very different from the story McCarthy is selling these days on January 6. The rioters ransacked the Capitol while doing nothing about Trump for hours at a time, effectively the entirety of yada yada. Which, well, is kind of the key.

Why is McCarthy doing this? Politics – pure and simple. In the days immediately following the rebellion, there was a real feeling—besides the furious Trumpers—that he had gone too far and that the episode would effectively be a breaking point between him and the Republican Party.

But, that break never came to an end. In fact, the cult of personality surrounding Trump only grew as the country moved on from January 6 – to the point that poll after poll shows that most Republicans believe the Big Lies that the 2020 election will hold. Stolen from Trump. (There is zero anecdotal evidence to support this claim.)

That reality forced a rapid recalculation by McCarthy, who:

b) knows that he must have the support of a former president (and Trump’s congressional ally) to do so.

All of a sudden, Trump was not to blame for what happened, but for someone who jumped to deal with the rebels as soon as he found out about them. This story does not coincide with known and accepted facts—and doesn’t—besides McCarthy’s point. His only goal was to return to the good qualities of Trump.

Here’s the problem for McCarthy: We have receipts. What he said in the week following the riots doesn’t quite resemble what he said now. And it matters.