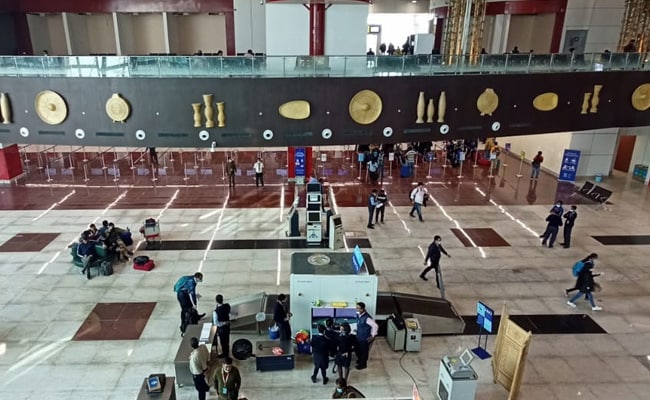 Guwahati: The new Integrated Terminal Building, or NITB, of Maharaja Bir Bikram Airport in Agartala opened with the first flight at 10 am today. The first flight was marked with a water cannon salute.

The large and advanced airport started its services today after being inaugurated by Prime Minister Narendra Modi on January 4.

During the inauguration ceremony of the terminal building of the new airport, PM Modi said that Tripura has the potential to become the gateway to the North-East region and usher in all-round development. This airport will help achieve this goal, PM Modi had said.

Union Minister Pratima Bhowmik participated in the commissioning of the new airport terminal. Ms. Bhowmick told reporters that she was happy to be a part of this historic moment and was fortunate to be among the first passengers.

He expressed happiness over the commissioning of NITB for the people of Tripura and said that very soon international flights to Dhaka and Bangkok would start from here. She was among the first passengers to deboard the airport today. A local folk dance Hojaigiri was also performed by the state artists on the occasion.

The minister along with the airport director greeted the first arriving passengers with packed sweets.

The terminal building is considered one of the best in the region. It houses sculptures, paintings, murals and local artefacts, which will connect travelers to the culture of Tripura.

With increased capacity, seamless amenities and spacious interiors, the airport will offer world-class facilities. The airport will now serve about 1,500 passengers during peak hours, which is three times the old capacity.

This will enable the movement of more than 5,000 passengers per day in the coming days. The check-in counters have been increased to 20, where the In-Line Baggage Screening, or ILBS, system will facilitate hassle-free baggage drop.

The airport now has large retail outlets with ample food and beverage counters providing a wider choice of passengers. The airport’s central food court will be a major attraction on the city side.

The airport is equipped with four air bridges. It has six parking bays, more than double the previous one. The much-awaited international tag for the airport will soon become a reality once the mandatory clearance is granted.