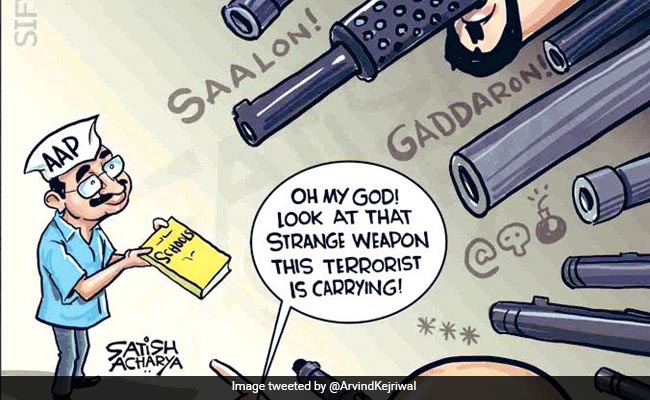 new Delhi: Delhi Chief Minister Arvind Kejriwal – dubbed a terrorist by the BJP and Congress over allegations of making separatist remarks on him – hit back on Friday afternoon with a cheeky cartoon that showed a meek-looking AAP boss ‘firing’ with guns Was. A book called ‘School’.

His critics are full of guns, one of whom (unrecognizable) is pointing at him and shouting: “Oh my god! Look at the strange weapon this terrorist is carrying!”

The first three guns are the phrase ‘firing’Gun Shot,sa*** no‘, And ‘traitors,

Earlier today Mr Kejriwal attacked the allegations, calling them “comedy” and describing himself as “the world’s most beloved terrorist… who provides schools, hospitals, electricity, roads, water”.

He said, “They have formed a gang against me and they are calling me a terrorist. This is a comedy – it is a matter of laughter. If so, why doesn’t (Prime Minister Narendra) Modi do it.Yes arrest me?”

The AAP chief was attacked ahead of Sunday’s Punjab elections after a video of Kumar Vishwas (a former party leader) claiming that Mr Kejriwal spoke of being the prime minister of a different state.

Spokesperson Raghav Chadha said the allegations were “to promote a feeling of hatred, malice, enmity in the society and especially against the Aam Aadmi Party…”

The Election Commission initially banned the video but announced a controversial U-turn on Thursday, the day Prime Minister Modi referred to Mr. Vishwas’ allegations at an election rally in Punjab.

Punjab Chief Minister Charanjit Channi, who used the video after AAP’s counter-attack of his “UP, Bihar, Delhi” give me“Comment, has called for a formal inquiry into the U-turn.

Voting for the new government in Punjab will be held on Sunday and the results will be out on March 10.